No one loves a rusty knife. It will detract from the aesthetics of the knife, as well as reduce its sharpness. Are you wondering about some useful tips to remove rust from knives? There are many methods. Find the most suitable solution for you in this article!

How to remove rust from knives 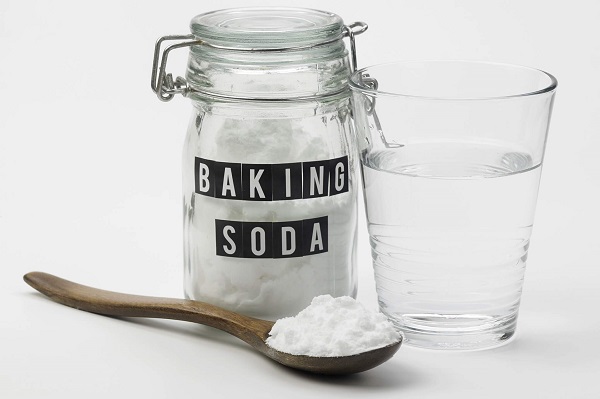 If you are wondering how to remove rust from a knife with baking soda. Follow these simple steps. We need materials: Baking soda, water, toothbrush, steel wool (or sponge), and cloth.

The first thing you want to do is clean your blade thoroughly as dirt can interfere with the rust removal process. Try to avoid water as that is the main cause of your knives rusting.

Instead, use some kind of cleaning solution and wipe it off with a cloth.

Next, make a little baking soda paste. You can pour just the right amount of baking soda into the bowl. Add some water (or lemon juice). Stir it up until it becomes a paste.

Apply the thick paste to the toothbrush and glide it quickly over the blade. You can only scrub with a toothbrush if the rust is not too severe or firmly attached.

For extremely rusty blades, you will need a little more abrasive to help remove the rust. Steel wool is generally recommended although it can damage your metal blade if you scrub too hard. Another alternative is a slightly abrasive sponge. Be careful not to scrub too hard as you may scratch the blade or damage the paint.

Finally, wipe the blade clean with a cloth to remove excess baking powder. If you want to be really good for your blade, you can apply some mineral oil afterwards to make sure it’s lubricated and protected from future rust. 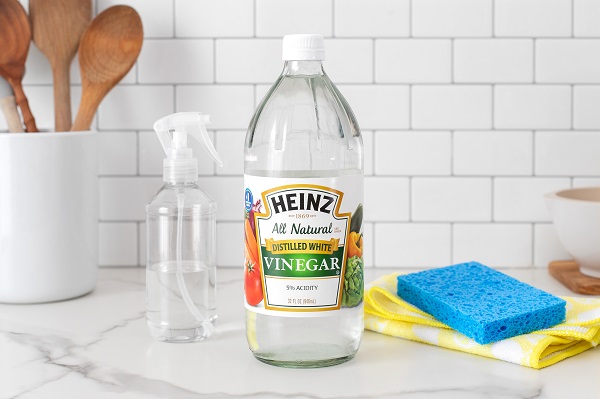 You can remove rust stains with white vinegar or lemon juice

Using white vinegar to remove the rust away from knife is also a great way. You will need the following ingredients: Pan or cup, white vinegar, sponge, cloth.

White vinegar contains a substance called acetic acid that attacks rust. Avoid using other vinegars as they can leave stains.

Soak the knife in white vinegar for about five minutes. Much longer and you risk damaging your knife.

Leave the knife for five minutes. Then switching to the baking soda method will remove the last rust. And then, we recommend lubricating your blade with camellia oil to help it resist rust better in the future.

View more: How to dispose of knives

Otherwise, you can simply rinse the vinegar with water and wipe and dry with a cloth.

I recommend applying this method to a larger knife such as a machete or knife that you won’t be using for food preparation because WD-40 can be harmful if ingested. But it’s a quick and effective rust removal method. Do not use it for lubricant.

This step needs little explanation. Spray WD-40 on the affected parts of the blade.

You’ll want to use very fine sandpaper (think 400) to gently remove rust from the blade. Make sure not to touch the edge or you could mess it up.

That’s enough to do it. If the rust is more severe, you can do one of the two previous methods. Again, avoid it if you are preparing food with a knife.

This probably sounds pretty crazy. I know it was used when we first heard it, but it’s worth a try if there’s a rusty knife in the kitchen. 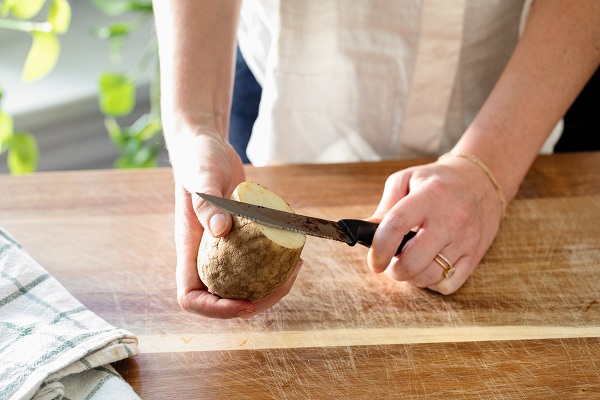 Potatoes contain oxalic acid, which is surprisingly effective at removing rust from knives. Oxalic acid dissolves rust, and For metal pieces that have no detail or light action, you can use regular dish soap and a potato to scrub away the rust.

Cut a potato in half. Cover the cut part with dish soap, and sprinkle salt (or baking soda) over the potato. The salt/baking soda acts as a mild abrasive to help remove rust as it melts. Rub the rusty area with a potato to remove the rust. Wash and dry.

Similarly, onions have sulphonic acid which will help remove rust marks on knives. In the case of onions, you just want to start sawing back and forth with the blade through the onion, leaving friction between the knife and the onion.

This technique combines the acidity of lemon with the abrasiveness of salt to treat small rust stains. Coat the rusty areas with salt and squeeze lemon juice over the salt. Leave the salt and lemon mixture for about two hours.

Scrub the object with lemon peel, or if the stain is stubborn, use a steel wool or wire brush. Rinse the lemon, salt and rust residue, then dry thoroughly.

How to remove rust from a carbon steel knife 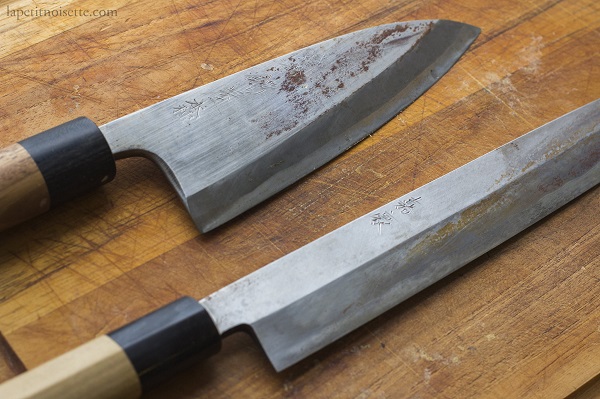 The easiest way to clean rust on carbon steel knives is with Bar Keepers Friend. The process for doing this is essentially the same as we described above for stainless steel knives.

There is a popular cleaner out there called Bar Keepers Friend. It is amazingly effective at removing rust from stainless steel.

While you may or may not have this around the house. It’s an inexpensive, effective, and easy solution for getting rid of knife rust.

Just add some cleaner on the rusty blade. It’s like a powder and there’s no reason for you to be stingy with it. Go ahead and use it a lot. Take a wet sponge or rag and apply the cleaner to the blade for a few minutes.

You will probably even notice most of the rust coming off when you scrub. Once done, rinse the knife and wipe it with a dry towel. The rust will disappear.

There is another way to remove rust and even the layer of rust that carbon steel knives leave behind and that is a product called Rust Erasers. They usually come in one set of fine and one medium grain, and they make it easy to clean your carbon steel blades.

What is rust actually? 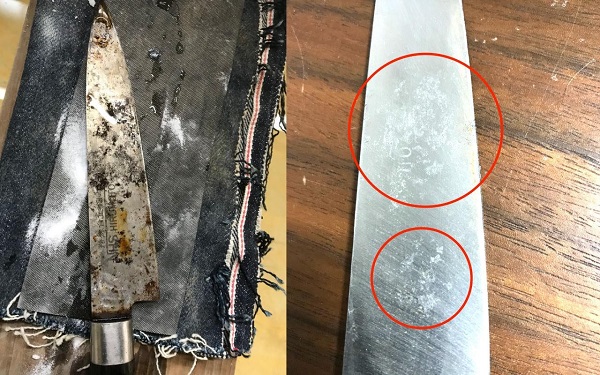 Rust spots will make your knives no longer sharp

Rust is another name for the compound known as iron oxide. the red/orange flake you see growing on the metal. Iron oxide takes place when iron and oxygen react with moisture.

And it doesn’t even have to be water, if there’s moisture in the air it can still cause your kitchen knives to rust.

Iron is the secret ingredient of steel found in your kitchen knives. So when the iron in your knife is exposed to oxygen and moisture, you have a recipe for rust.

Related: How to Measure a Knife

But how about stainless steel blades? Stainless steel is more stain resistant, they are not stain-proof. It still has at least 10.5% chromium so it’s still considered steel.

It’s best to think of stainless steels as having an extra layer of protection that allows them to be ‘stainless’ and not ‘stain free’.

How to prevent rust forming on your kitchen knives and scissors?

To keep your knives and scissors from rusting, keep the following tips in mind. 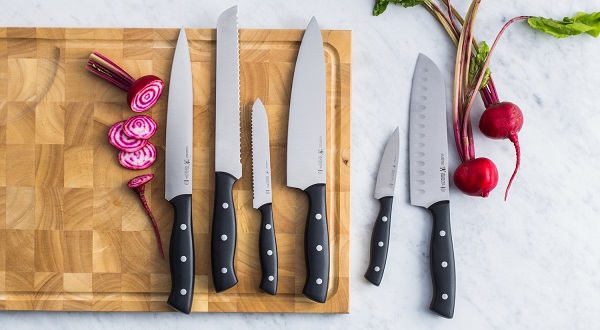 You can prevent rust appearing on the blade of your knife

1. Wash and dry your knives and scissors immediately after use

If you often let your hand wash dishes air dry, consider drying your knives and scissors by hand to reduce moisture.

2. Do not put knives in the dishwasher

Dishwashing chemicals can damage the chromium oxide layer of stainless steel. In addition, dishwashers expose your tools to more moisture than necessary.

3. Don’t leave everything in the sink

You can put your chef’s knife in the sink and leave it all there until morning. But letting the knife soak in the sink can damage the blade and eventually lead to rust.

Similarly, don’t leave knives or scissors wet waiting for their next action on the cutting board. Wash and dry these tools each time they are used. It may seem fancy, but it’s easier than cleaning rust!

To remove rust from your knife blade, we have plenty of methods. However, choose the way that works best for you. Ingredients like baking soda or white vinegar are easy to find in the market. And always remember to store your knives regularly.

How to Measure a Knife: Tips for Measuring the Right Length

How to sharpen a serrated knife? A Step-By-Step Guide