A succulent pork loin is a delicious supper option. It’s hardly the end of the world if someone forgot to bring the pork loin out of the freezers. So, how to cook a frozen pork loin?

You can cook a frozen pork tenderloin in the oven, but you will need to give it more time to cook. Before putting the pork loin in the oven, instant pot, or crock pot you may defrost pork loin by running water over it or place it in the microwave.

Let’s read on to discover!

How To Cook Frozen Pork Loin 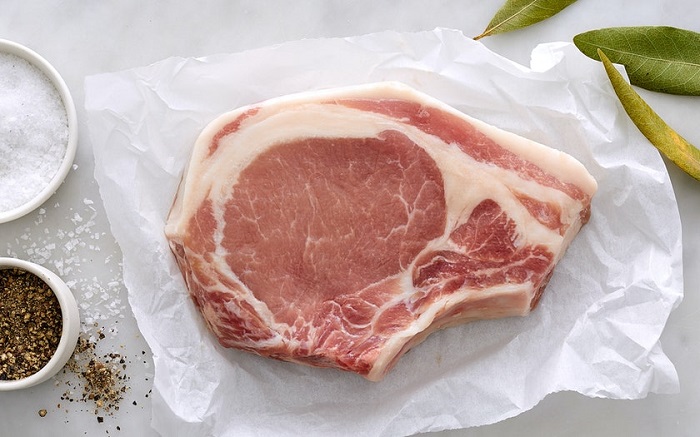 You can cook a pork loin while frozen since it is tiny and has an equally circular shape. Roasting a frozen, already-seasoned pork loin is quick, easy, and handy, but the outcomes may not be as uniform as when using a fresh pork roast.

Cook a tenderloin or loin from frozen by grilling, roasting, or broiling it, but keep in mind that it will take about 50 percent extra time to cook.

Cook A Frozen Pork Tenderloin In The Oven 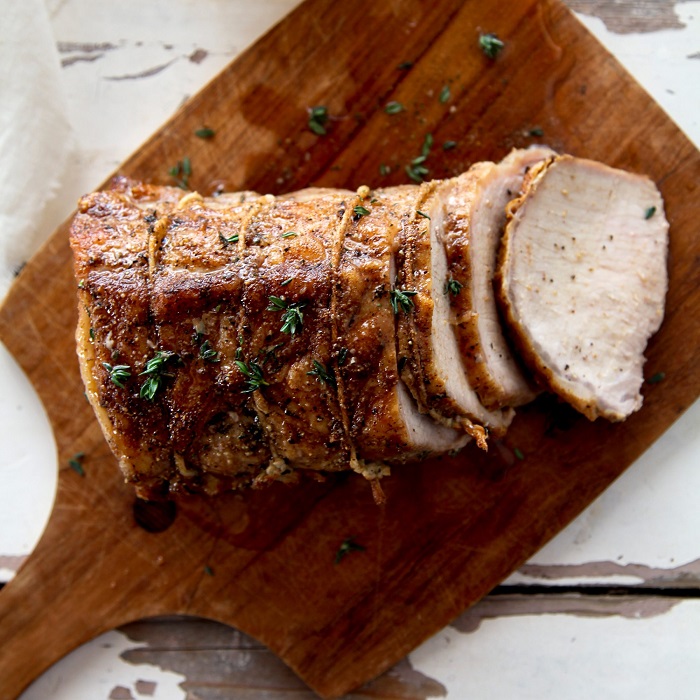 You Can Cook Pork Loin In The Oven

In a grill pan, lay the frozen meat. Fill the pan with half of a cup of beer, apple juice, broth, water, or wine. Cover firmly with a cover or foil the roasting pan with a lid before placing it in the oven.

While it takes approximately twenty minutes for each pound to cook thawed meats, frozen pork tenderloin requires an extra fifteen minutes per pound for you to cook entirely. Cook the pork tenderloin until it reaches an internal temperature of 145 degrees Fahrenheit.

View more: How To Fry Spam

Cook A Pork Loin In A Crock Pot 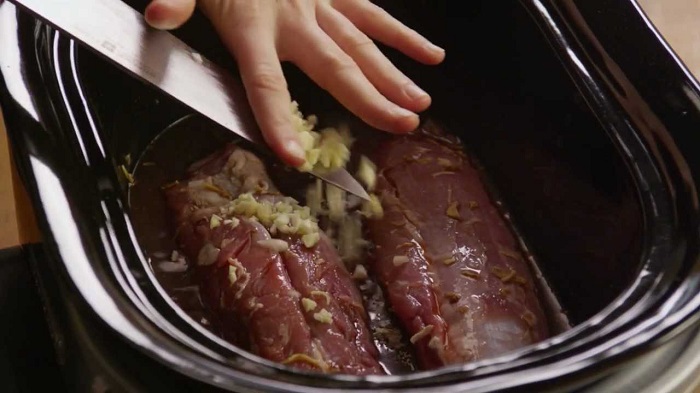 While there are many delicious recipes for cooking frozen pork roast or loin in a crockpot, the National Pork Board does not endorse it. The pork loin takes much too long to reach a temperature hot enough to kill the bacteria in the crock pot.

Place the pork tenderloin in the crock pot when it has thawed. Combine the spices with at least half of a cup of water or another liquid.

Cook for five to eight hours on low heat or five to six hours on high heat, covered. When the pork tenderloin reaches at least 145 degrees Fahrenheit, please remove it from the oven.

It’s not a good idea to cook partially frozen pork tenderloin or roast it in an instant pot. To add more flavor, defrost the pork loin and brown it in a roasting pan with a bit of heated oil. 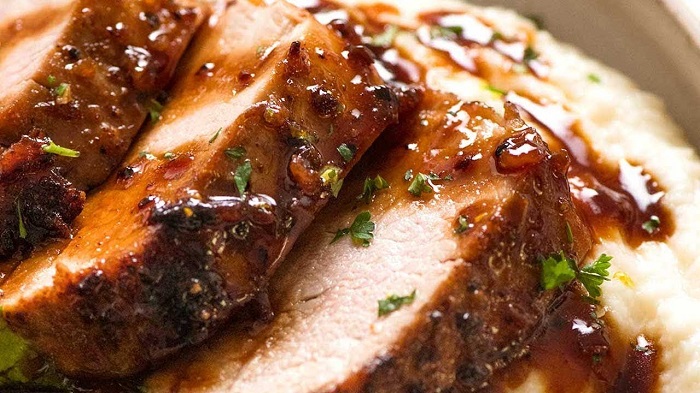 Brown The Meat With Honey

A half of broth, water, or juice cup plus your preferred seasonings On the stew setting, cook for ten minutes each pound. Fry the pork for up to fifteen minutes more if its internal temperature has not reached 145 degrees Fahrenheit.

You can rely on the instructions in this video to better understand how to cook partially frozen pork roasts or frozen pork tenderloin in an instant pot.

To keep the fluids from seeping into the refrigerator, place the pork tenderloin in a roasting pan or gratin dish. Keep the pork chops wrapped in plastic or a resealable plastic bag to defrost in the sink. 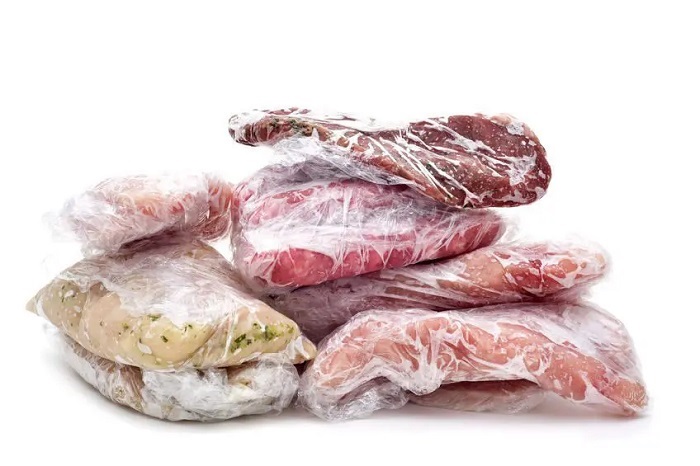 Place the tenderloin in a bowl and fill it halfway with water. Until the frozen pork tenderloin has thawed, add more water every fifteen minutes. Cook as soon as possible.

You can also defrost pork tenderloin in the microwave. Take the pork from its package and set it in a microwave-safe casserole dish. Your microwave most likely has a thaw setting.

Make sure you set it to the right amount of pounds. Adjust the microwave to 50 percent power and heat for seven to ten minutes each pound if it does not have a thaw option.  Prepare the pork tenderloin right away.

When cooking meat from frozen is straightforward and does not sacrifice flavor, there are several things to keep in mind when preparing meat straight from your freezer.

You should always thaw meat before slow cooking, said the USDA. The risk of frozen meat remaining in the “danger area” — from 40°F to 140°F — for an extended period when cooking.

In a crock pot, staying in the danger area for prolonged periods allows bacteria, including salmonella, to thrive in a microenvironment before hitting the temperature at which they are typically destroyed. 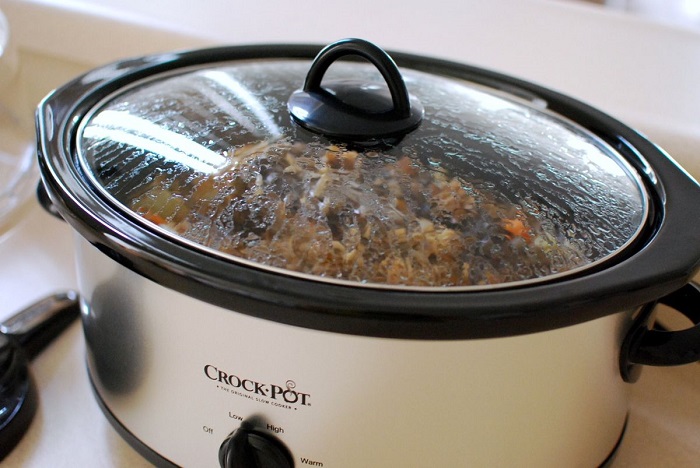 Cooking Pork In Crock Pot Requires Too Much Time

Related: How To Cook Steak On George Foreman Grill

The thawing pork loin time for more significant portions or complete birds (such as a turkey) is around 24 hours for five pounds. 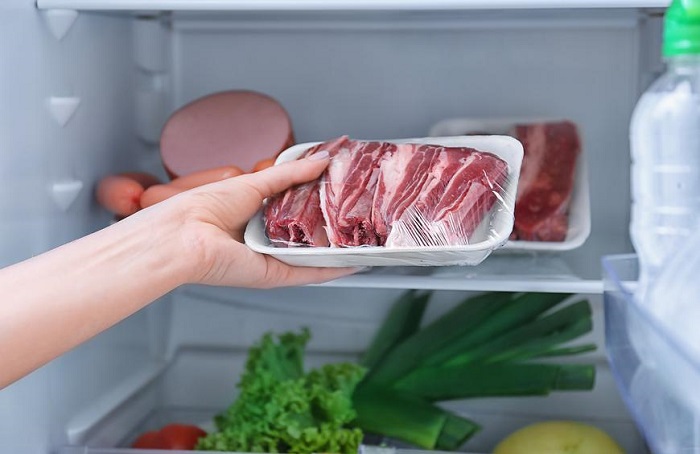 Defrost Meat In The Refrigerator

It will increase the temperature to the “danger area,” where germs can develop. The same is valid for thawing frozen cooked meat in hot water.

Here are some delicious pork tenderloin recipes that you can make at home. 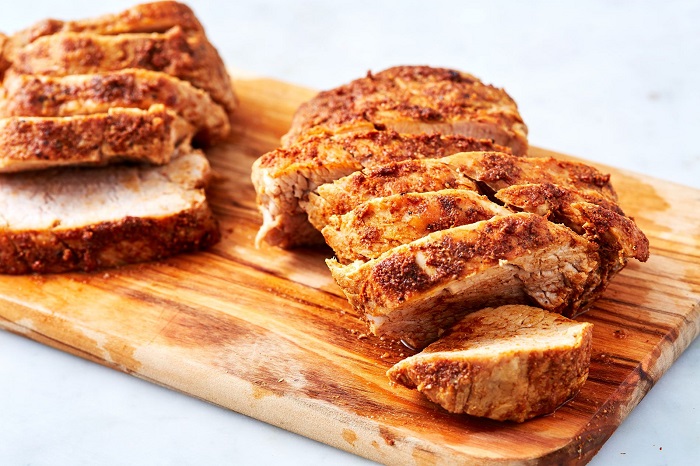 This easy dish is straightforward to follow. This flawlessly cooked pork tenderloin recipe comes in just twenty minutes with only five minutes of hands-on work.

First, season the fresh pork with pepper and salt. Heat the oil in the instant pot on the Saute option. When the oil begins to shimmer, add the uncooked ground meat.

Sear for about five minutes, or until brown all over. Place the meat on a platter. Cumin, chili powder, and garlic powder are sprinkled liberally throughout the dish.

Second, turn off the Saute function. Place the trivet, a water cup, and the fresh ground pork on the trivet in the instant pot. Close the cover and set the pressure to high. Cook for five minutes on high heat.

Third, leave it a minute for force to dissipate before quickly releasing the remaining pressure naturally.

Finally, Allow a few minutes for the pork tenderloin to rest before cutting against its grain. 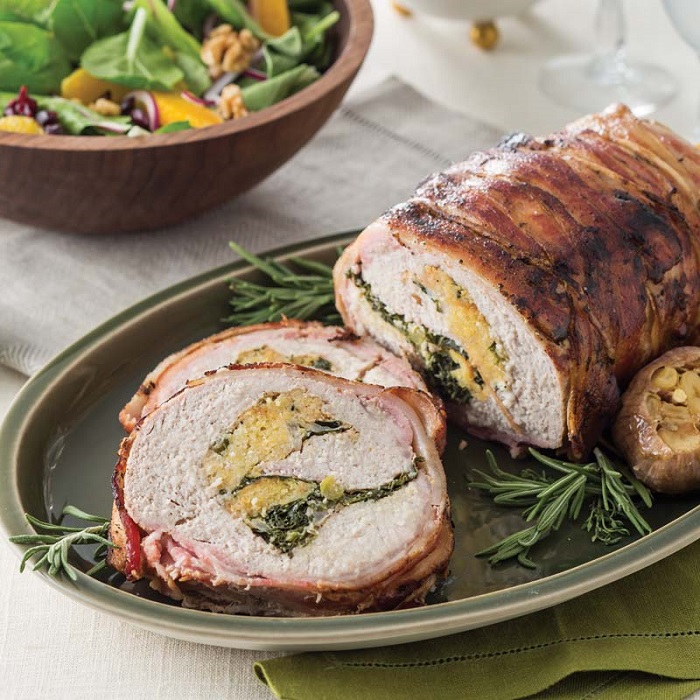 This bacon-wrapped pork tenderloin is a one-of-a-kind dish that only calls for four ingredients: bacon, pork, olive oil, and honey. Sear the pork tenderloin, wrap it with bacon, sprinkle it with honey, and cook it.

First, combine the pork tenderloin and the seasoning in a big plastic bag and close it.  Please put it in the refrigerator for up to a day before serving. Take the loin out of the package. Using paper towels and pat dry.

Second, wrap the pork tenderloin with bacon slices. (Don’t make it too tight since the bacon shrinks as it cooks).

Third, arrange on a foil-lined baking tray or pan, then bake for twenty to thirty minutes at 400 degrees F. At this stage, the internal temperature should be between 140 and 145 degrees. When you roast it, it will rise a bit higher.

Finally, preheat the broiler to high and cook the bacon until crispy. Please make sure the internal temperature is between 145 and 150 degrees F. Then, slice and serve it hot. 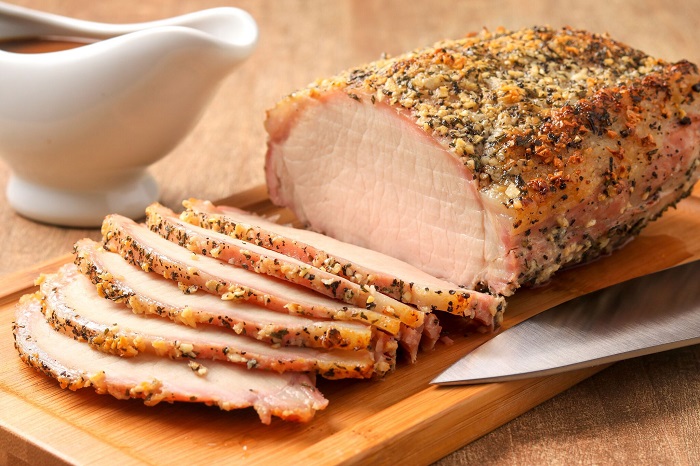 Find a giant pork tenderloin you can, but avoid those that have already been marinated. People may market them frequently in bundles that include a marinade.

First, preheat the oven to 400 degrees Fahrenheit. Drizzle 2 tbsp oil over the potatoes in a baking dish and season with pepper and salt. Roast for about a half-hour, or until golden brown.

Second, season the pork chops all over with pepper and salt before placing them on the layer of potatoes.

Third, stir together 1/4 cup oil, garlic, maple syrup, mustard, red pepper flakes, and rosemary in a mixing bowl. Season pork tenderloin with pepper and salt, then sweep with butter and pour any remaining sauce over the layer of potatoes.

Finally, continue roasting for another twenty minutes until the potatoes are soft and finishing the cooking process. The ideal internal temperature must be 145 degrees. To serve, top with additional rosemary.

It is acceptable to cook frozen pork loin in oven, stove, or grill without defrosting pork tenderloin; however, the preparation time may increase by 50%.

Hopefully, this article is beneficial to you. If you are still unsatisfied with this post, please refer to Battersby for more helpful tips.

Thank you for reading!

I don't know who wrote this, but I hope it was NOT written by a chef! Or a cook. The terms "loin" and "tenderloin" are used interchangeably throughout this article, but they are two distinct cuts of meat and are not interchangeable.

Hello, I think there is a mistake in this recipe "Instant Pot Pork Loin". https://battersbybrooklyn.net/how-to-cook-frozen-pork-loin/ The First and Second steps refer to ground pork meat, not pork tenderloin. Not a problem for me but thought I'd alert you. Thank you

Step By Step Guides On How To Reheat Egg Rolls